The Campaus were one of the many French families that populated Detroit in the very early days of the city’s history. Michael Campau arrived in 1707 and his brother, Jacques, arrived in 1708. The author’s family line begins with Jacques Campau, but some of the other, more colorful, profiles of Campau family members are also included here.

Jacques Campau was born in 1677 in Montreal, Canada and arrived in Detroit in 1708 at the invitation of Antoine de la Mothe Cadillac who founded Detroit in 1701. He was an officer and a secretary to Cadillac and by the 1740′s, he developed one of the finest merchant stores in all of Detroit, buying and selling wheat, corn, bread and furs.

He died in Detroit in the year 1751. During the next one hundred years, his numerous descendants played leading roles in the commerce of the region. Jacques Campau is the author’s 6th generation lineal grandfather. 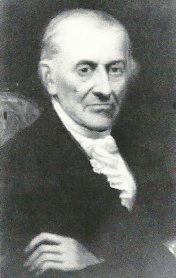 Joseph Campau was the grandson of the original settler, Jacques Campau, who came from Montreal to Detroit in 1708.

Joseph Campau was born in Detroit on February 20, 1769 and was an extremely successful business man, although at least one contemporary publication labelled him a “slum lord.”

Mr. Campau is buried in Detroit’s Elmwood Cemetery, and therein lies an interesting story. Campau could not be buried in the Catholic Mount Elliott Cemetery, along with his wife, Adelaide Dequindre, and some of their children, as he had been excommunicated from the Catholic Church in 1817.

He had many heated disagreements with Father Gabriel Richard, Detroit’s famous pastor of St. Anne’s Church over the years – and not only because he joined the Masons, but he also sold whiskey to the local Native American tribes. Others claimed he overcharged interest to his delinquent tenants who had fallen behind.

By the time of his death on July 23, 1863, he owned over 10 million dollars worth of real estate, making him the largest landowner in Michigan, and certainly, one of Detroit’s wealthiest citizens.

As with many early Detroiters, today Joseph Campau is remembered as the name of the primary thoroughfare in the city of Hamtramck. His obituary said of him, “To the honest and industrious, he was always lenient.” 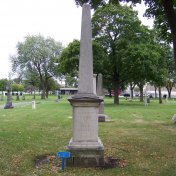 Barnabas Campau was the younger brother of Joseph Campau, arriving in this world in 1775, six years after Joseph. He served as a private in captain Solomon Sibley’s company during the War of 1812, and for many years in Detroit, he was a merchant and a fur trader, accumulating a large estate.

In 1817, at the age of forty-two, he bought Hog Island, known today as Belle Isle, for $5000 from an heir of William Macomb. One of his sons, Alexander Macomb Campau, built a summer home on the island in 1874. Known as the “White House” for years, it currently houses island offices for the Detroit’s Park and Recreation Department. Barnabas’ heirs later sold Belle Isle to the City of Detroit in 1879 for the princely sum of $200,000.

He married his first wife, Therese Cicot, in 1808. She died in 1817, and his second wife, Archange McDougall, who he married in 1821, was the granddaughter of his stepmother, a woman he intensely disliked. He was described as “portly, dignified and polite.” He had 10 children in all, sadly, 6 of them died in infancy. Barnabas died in 1845; a stone monument in Mount Elliott Cemetery marks his final resting place.

Alexander Macomb Campau was the second son of Barnabas and Archange McDougall Campau, born in Detroit on September 13, 1823.

Alexander Macomb Campau’s legacy is that of a strong-willed individual; some would say a tyrant. He was the second son of Barnabas Campau and Archange McDougall Campau. He was born in Detroit on September 13, 1823 and was a direct descendant of Jacques Campau who came to Detroit in 1708 from Montreal, Canada.

He was sent to Georgetown University at the age of seventeen, and a Detroit newspaper article, many years later, tells of his challenging train ride to Washington, D.C. In the early days of train travel, trains ran off the tracks every few minutes. The story details young Alex Campau, “dressed in his suit of maroon-colored broadcloth, with stock and lace ruffles at throat and wrist had to get off each time, and with his fellow passengers, helped to put the cars back on the rails.”

He returned to Michigan after graduating from Georgetown University in 1844. Alexander attended the University of Michigan, in Ann Arbor, for one more year of studies. He was one of only 11 students and 2 professors! He married Eliza Stringham Throop on April 15, 1846 and they had nine children.

Alexander further developed the fisheries on Belle Isle, having inherited the island from his father, Barnabas, and at one time, employed nearly 500 Frenchmen. He also was a large landowner in Detroit, attending to 600 to 700 tenants, in a nearly feudalistic way.

The Campau family, since their early arrival in Detroit, had always been good Catholics so when Alexander’s church came to him, wishing to build a new house of worship, he loaned them the money they requested to be paid back with interest. The church was erected on land he donated, time passed, and no effort was made to pay him back. When Alexander inquired about his loan repayment, he was told, “the money went to God.”

He never got his money, and he left the Catholic Church, worshiping till the end of his days, at Christ Church, Detroit located on E. Jefferson, next door to Sibley House.

At the age of 85, he lay on his deathbed, and a Catholic priest was called to his bedside to administer the last rites. As the priest placed the cross to Alexander’s lips so he could kiss it, he defiantly spat upon it instead! He died, recalcitrant to his last day, on April 1, 1908.

Frances Eliza Campau was affectionately known as “Frankie,” and she grew up in the finest style Detroit of 1854 had to offer. She was the sixth child of the union of Alexander Macomb Campau and his wife, Eliza Stringham Throop, Frances was a direct descendant of Jacques Campau who came to Detroit in 1708 from Montreal, Canada.

She grew up playing on Belle Isle which her family owned. Frances also spent many summers with her ever-growing family, including twenty-three grandchildren, at her cottage at Pointe Aux Barques, a resort in the thumb area of Michigan.

With her marriage to Frederick Trowbridge Sibley in 1877, two cultures were united – the French Campaus and the English Sibleys.

She was, by all accounts, a strong and caring woman who not only faced scandal when her husband was forced to leave Detroit under the suspicion of embezzlement, she raised six daughters, largely on her own. She was very involved with The Women’s Exchange, where women could buy and sell homemade crafts, earning some financial independence from their husbands.

Frances continued to live in her father’s home, raising her daughters, and saw them all properly married. She also served as treasurer for A.M. Campau Real Estate, her father’s real estate company.

She died on December 10, 1935 at the age of 81. Funeral services were held at Christ Church, Detroit on E. Jefferson, next door to the Sibley House. She is buried in Detroit’s Elmwood Cemetery.