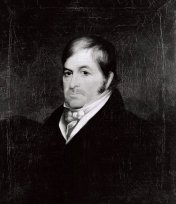 “a young man of fair and unblemished character”

Judge Solomon Sibley is the reason there is a Sibley House today. Judge Sibley was born in Sutton, Massachusetts in 1769 and was educated at Rhode Island College, now known as Brown University.

When Solomon Sibley arrived in Detroit in 1797, he was one of only two lawyers, and he soon earned his position as a prominent member of the community. In January 1799, Solomon Sibley was elected as a delegate to the legislature of the Northwest Territory, although his election was challenged by his opponent who claimed that Sibley provided the voters with liquor!

This appointment dictated much traveling between Detroit and Marietta, Ohio where Judge Sibley attended sessions of the court. A fortuitous situation for Judge Sibley as on one of these business trips, he met and fell in love with seventeen-year old, Sarah Whipple Sproat. They were married in 1804, settled in Detroit, and in 1806 Judge Sibley was appointed Detroit’s first mayor by Governor Hull.

In the early 1800′s, Solomon and Sarah Sibley were also central figures behind the settlement of the Village of Pontiac, Michigan. They provided the oversight and financial means for the first buildings constructed in Pontiac including what was known as “Sibley’s Cabin,” an 18′ X 20′ cabin which remains, to this day, as the center of the Sibley-Hoyt house in Pontiac. 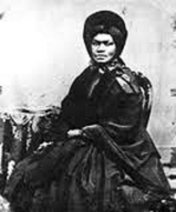 In 1825, the Sibleys sold almost 50 acres of land in Pontiac to a woman named Elizabeth (Lisette) Denison Forth, making her the first woman of color to own land in Michigan. At the end of her life, Mrs. Forth instructed that a portion of her estate, garnered from numerous savvy business dealings, be used to help fund the building of an Episcopal church on Grosse Ile, a residential island downriver from Detroit. She had lived and worked in the Biddle family household on Grosse Ile, and with additional funding from the Biddles, St. James Episcopal Chapel was completed in 1868.

Solomon Sibley died in Detroit in 1846 at age 77, and is buried in Detroit’s Elmwood Cemetery. Upon his death, many members of the bar association wore a badge of mourning for thirty days. Solomon Sibley always defended his adopted home state, and to counter derogatory comments from an Ohio land surveyor, calling Michigan “…all swampy and sandy…,” he grew a pear, in his own orchard, renowned for its extraordinary size. The pear, allegedly, weighed 30 ounces, measured seven and one-half inches long and fourteen and one-half around! 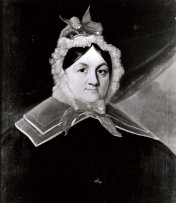 Sarah Whipple Sproat (Sibley) was born in Providence, RI in January of 1782. Sarah was an accomplished and confident young girl, later wife and mother. Both her father, Colonel Ebenezer Sproat, and her grandfather, Commodore Abraham Whipple, lost their fortunes supporting our country’s war for independence. They were both given land grants, and in 1788, they founded Marietta, Ohio. Living conditions in the early days of the settlement were harsh, and Colonel Sproat moved his only daughter, Sarah Whipple Sproat, to schools first in in Bethlehem, Pennsylvania and eventually to Philadelphia.

Six years later, when Sarah had turned sixteen, the small settlement of Marietta, Ohio had become “civilized,” and her father, Colonel Sproat, felt it was safe enough for her to be with him. On their return trip to Marietta, Sarah and her father brought with them, on horseback, the first piano to travel west of the Allegheny Mountains! Later, that piano stood in the parlor of the Sibley House.

Judge Solomon Sibley, having court business in Marietta, met his future bride, Sarah Whipple Sproat, and they were married in 1804. Sarah was twenty-two.

One account of Sarah’s well-known poise and courage is described in a book published by the Minnesota Daughters of the American Revolution (D.A.R.), and depicts her extraordinary bravery during the War of 1812 as she and others were inside Fort Detroit.

“…the women and children were all placed in the fort for safety. Mrs. Sibley, then the mother of three children, was found holding her youngest, child, Henry Hastings Sibley in her arms, while with her busy hands she was making cartridges for the soldiers.” Four officers, including her cousin, were killed by a cannonball in the adjoining room. Her husband was out in the field commanding a company of militia…”

Sarah Whipple Sproat Sibley died in 1851 and is buried next to her husband, Judge Solomon Sibley in Detroit’s Elmwood Cemetery. Judge Sibley and his wife, Sarah, are the author’s 4th generation lineal grandparents.